Some older hearts were pounding after this lift of four 8-seater picnic tables made at the Shed for Pirinoa School, in partnership with Juken New Zealand...

Each school holiday up to 70 kids attend the Henley Mens Shed for some fun making things with some guidance from the Blokes at the Shed...

Yet another diversity in the range of activities available at the Mens Shed is this group, inspired by the desire to recall and capture life growing up...

Several current projects at the Shed are featured here

Fully rebuilt steeple and belfry for the Tinui Church departs 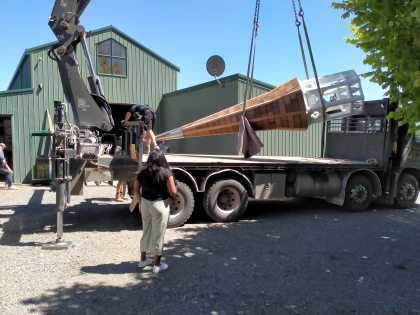 A Unique Shed made as a commercial prototype 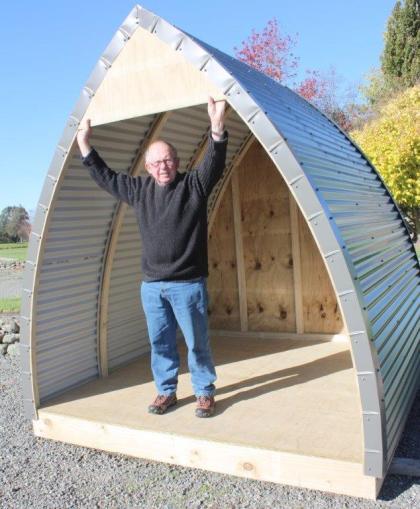 Shed Coordinator, Ms Claus and some of the helpers who constructed a replica of the Shed in Gingerbread.

A brand new metal turning lathe, it took a bit of push and shove to get it into place, but well worth the effort. Now for some precision turning. 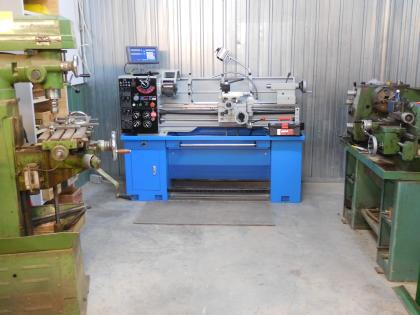 Good things take time, and the Beamer (BMW) is getting a new life.

A bakers dozen or more like a hundred, its Christmas mince pie time for Dave and his cheery helpers in the Shed kitchen. 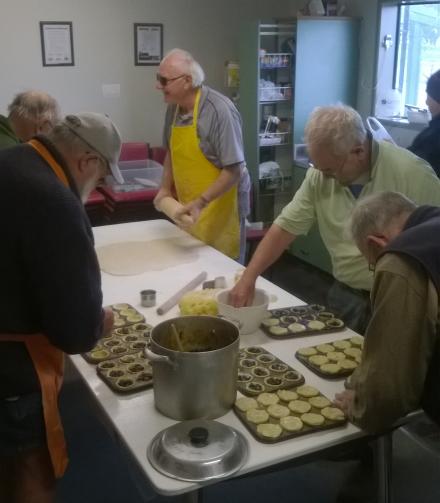 Douglas is busy again making stools for the Cubby House, and when he's not, its another toy garage, car transporters and that's on top of his front end loaders, grasshoppers, tow trucks. 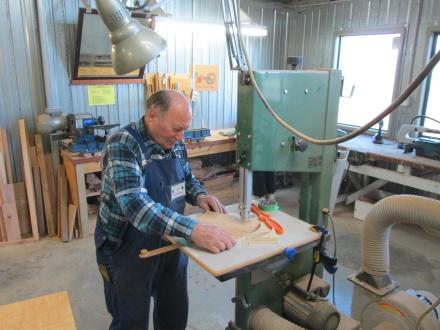 Dennis has a new friend in the making, she doesn't say a lot, but has attracted a number of admirers. Just another aspect of what goes on in a Mens Shed. 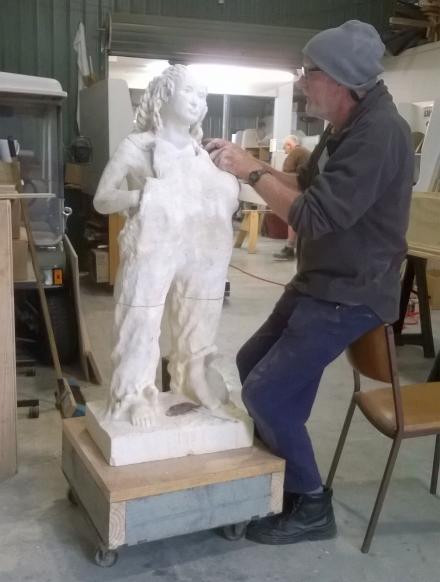 Henley was Shedding, and a truck load is on its way to help the Featherston Menz Shed get established. Looks like Jim is doing a final stocktake while the load is being tied down, everything just had to go 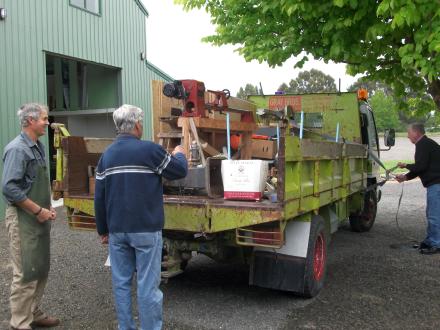 Some older hearts were pounding after this lift of four 8-seater (3 metre long) picnic tables made at the Shed for Pirinoa School, in partnership with Juken New Zealand 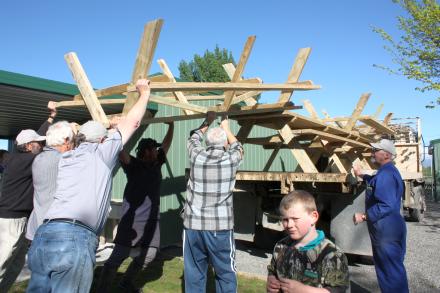 The lads (or is it Lab's) hot off the work bench and now out the door to catch a bit of the sunshine and fresh air, quite a litter, and if you would like one as a companion come on down to the Shed and take your pick. 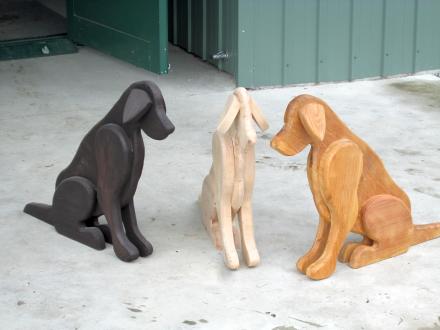 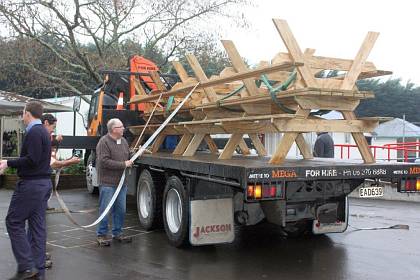 Stove, Fridge and even the kitchen sink, made for the Alfredton Playgroup. 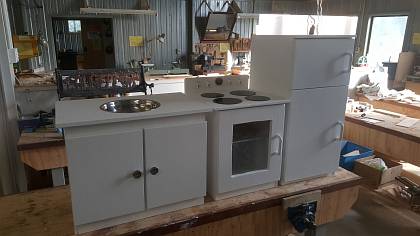 Connecting Communities manager Sandy with Robert the Robot, along with Wayne who has just added the finishing touches to this the 7th Free Mini Library for Masterton. 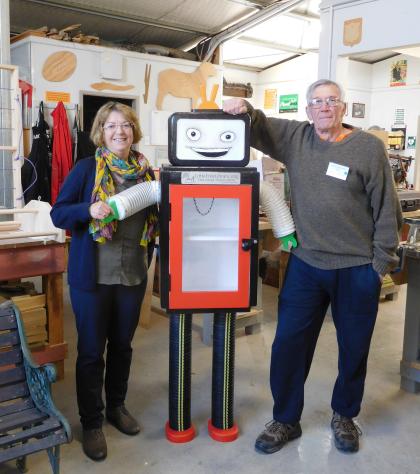 Some say they are onions, but they are just wrought iron garden features, no tears involved. 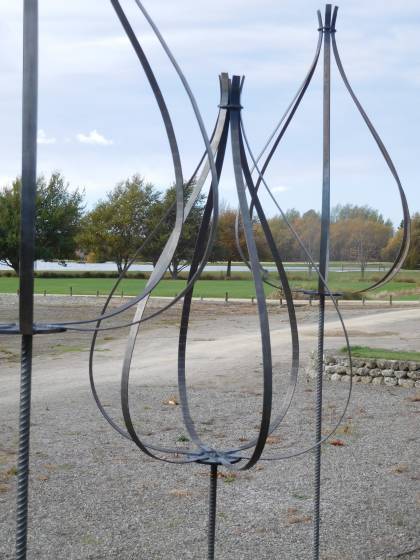 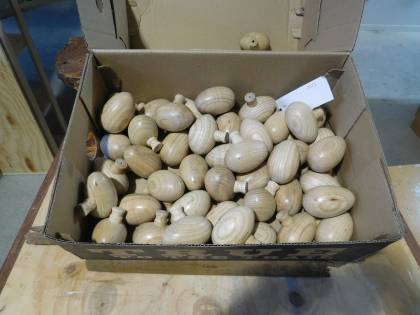 From the shearing shed to the big house, the small pen doors have been doubled to make full size doors for a new house, old character given a new life. 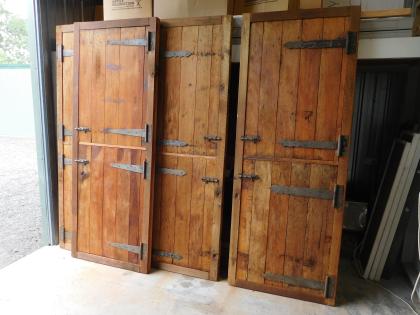 Pigs and Barrows, and cats, and alphabet letters, all sorts made by the students at the Mens Shed to decorate their school buildings. 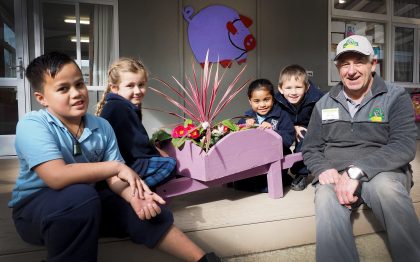 A new impact for the Teddy Bears picnic was the entrance way built at the Mens Shed. 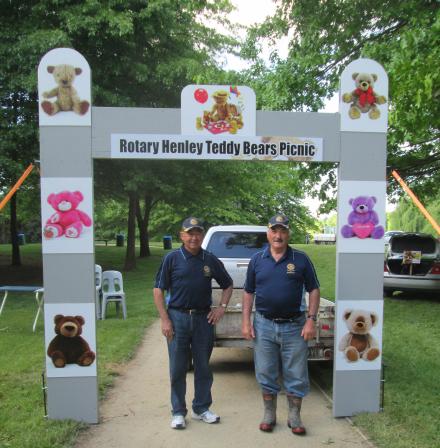 A squadron or two of very limited edition aircraft being crafted for the Wings over Wairarapa air show in January 2015. 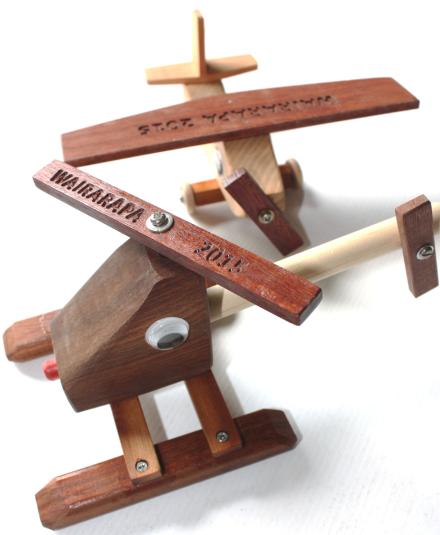 A special day at St Teresa's School for some of the blokes from the Mens Shed, when they got to see the new entrants class demonstrate their new activity equipment which had been made by the blokes thanks to funding support from the Parish and Rotary. 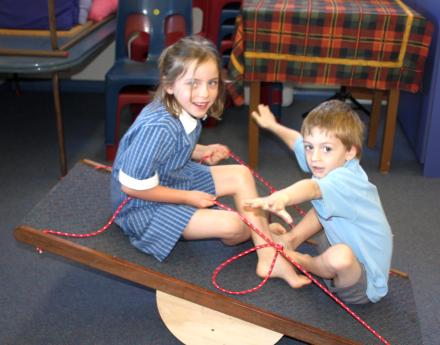 A Blokes day out, thanks to Tranzit Coachlines for the bus, this was a great chance to exchange some thoughts and ideas with the Blokes at the NaeNae Menz Shed, have a BBQ lunch with them, then of to Bunnings to buy some tools.

"Shedding really is a great time in life" 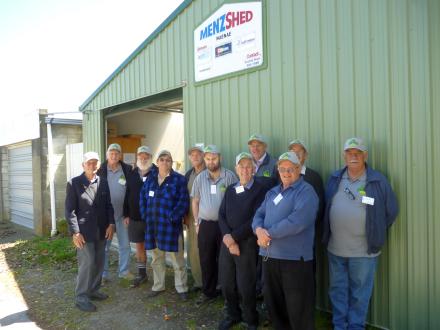 Eddy was in his element creating, with the major components crafted from LVL and solid wood, "The Blue Machine" is a vertical belt sander, a precision piece of equipment and something to be proud of.

An update on Ian's Wavy Bridge, here it is in situ, a work of art.

Not just a bridge but a roller coaster ride for the grand kids on their bikes. 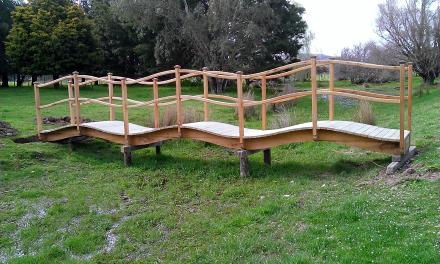 In partnership with Friends of Friends the blokes have constructed 3 raised garden beds, each 6m x 1.2m which will be jointly utilised as therapeutic activity and adding further diversity to the range of activities offered at the Shed. 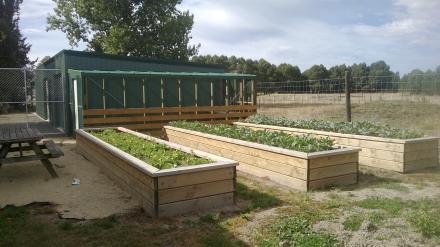 Wives, sons, daughters can involve that special man in their life at the Henley Mens Shed by giving him an introductory gift voucher...

Members receive email newsletters, alerting everybody to events members may wish to participate in, or lend a hand with a project...

What the best dressed Blokes at the Shed are wearing out and about. Now available to purchase by members of the Henley Mens Shed...